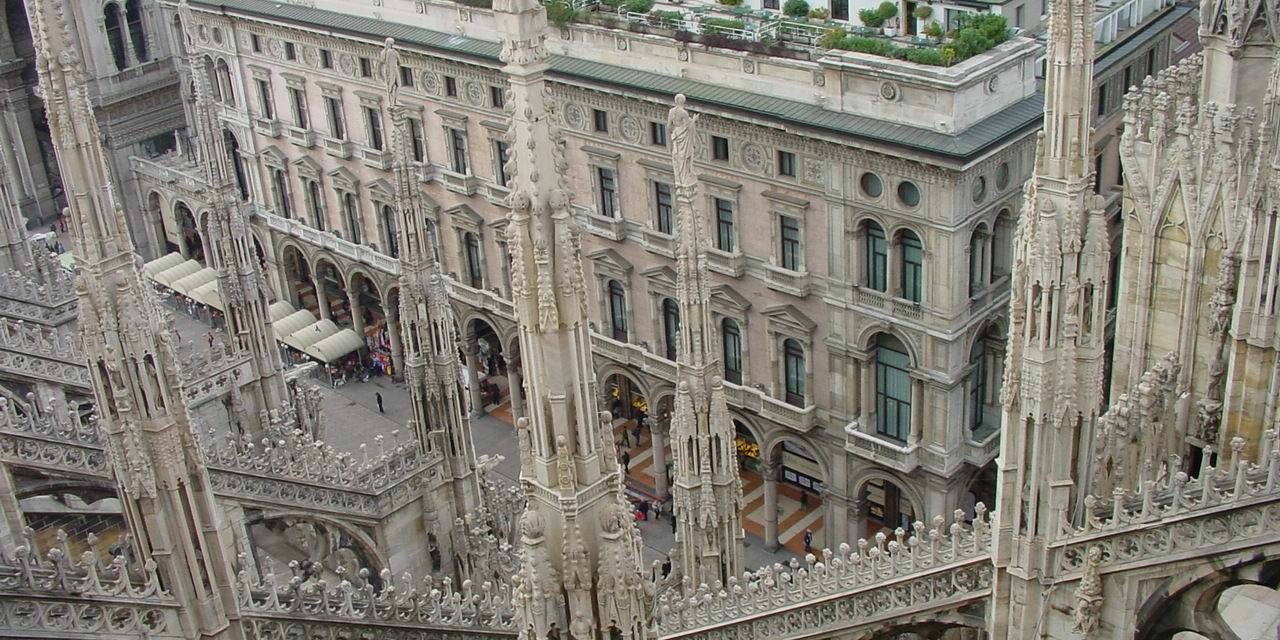 The Duomo di Milano is one of the most famous buildings in Europe. It is the second largest Roman Catholic cathedral: only the cathedral of Seville is larger (as is Saint Peter’s Basilica in Rome, which is not a cathedral).

It is 157 meters long 40,000 people can fit comfortably within. The main spire is 109 meters high. The great windows of the choir were reputed to be the largest in the world. It is a particularly large and elaborate Gothic Cathedral on the main square in the center of the city of Milan 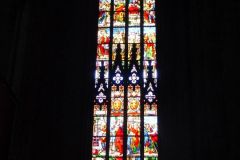 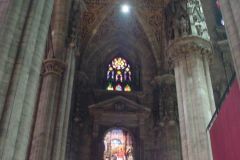 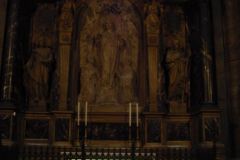 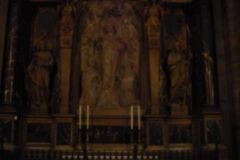 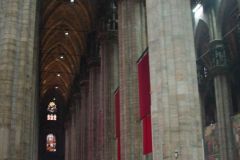 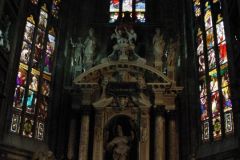 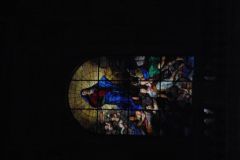 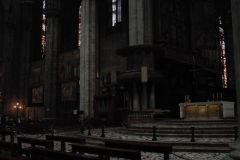 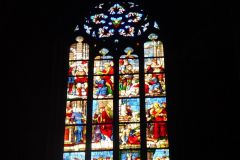 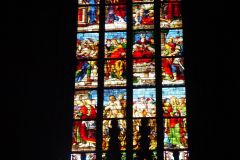 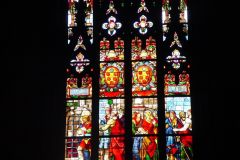 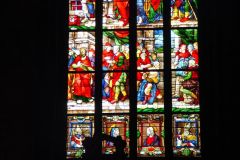 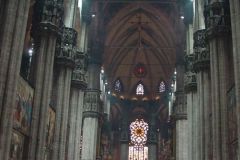 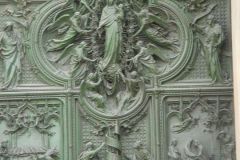 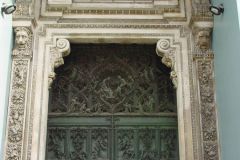 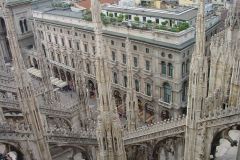 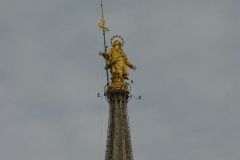 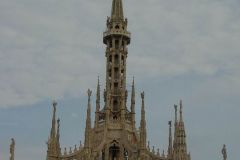 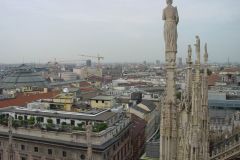 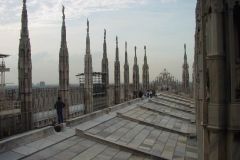 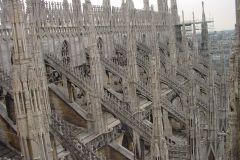 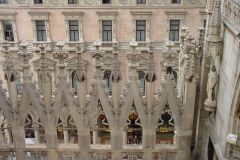 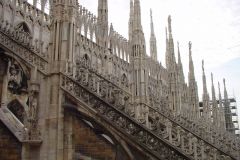 The street plan of Milan, with streets either radiating from the Duomo or circling it, reveals that the Duomo occupies the most important site in Roman Mediolanum. Saint Ambrose‘s ‘New Basilica’ was built on this site at the beginning of the 5th century, with an adjoining basilica added in 836. When fire damaged both buildings in 1075, they were rebuilt as the Duomo.

In 1386 the archbishop, Antonio da Saluzzo, began the new project, in a rayonnant Late Gothic style that is more characteristic of France than Italy. Work proceeded for generations, the main spire being topped off in 1762 (1744?) with a polychrome statue of the Madonna, to whom the Duomo and its predecessor have always been consecrated. Even now some uncarved blocks remain to be completed as statuary.

The Duomo of Milan blurs the normal distinctions between Gothic and neo-Gothic, for the Gothic west front was begun in 1616 and completed two hundred years later. Only in its details does it reveal its Baroque and Neo-Classical date. From 1900 some of the least Gothic details of the facade were replaced in a more Gothic style to designs of Giuseppe Brentano. Gothic construction on the rest of the Duomo was largely complete in the 1880s.

Visiting the roof cost 5€ using a lift and 3.5€ using stairs

The cathedral’s five wide naves are reflected in the hierarchic openings of the facade. Even the transepts have aisles. The roofline dissolves into openwork pinnacles that are punctuated by a grove of spires.

The huge building is of brick construction, faced with marble from the quarries which Gian Galeazzo Visconti donated in perpetuity to the cathedral chapter. Its maintenance and repairs are very complicated.

“What a wonder it is! So grand, so solemn, so vast! And yet so delicate, so airy, so graceful! A very world of solid weight, and yet it seems …a delusion of frostwork that might vanish with a breath!…The central one of its five great doors is bordered with a bas-relief of birds and fruits and beasts and insects, which have been so ingeniously carved out of the marble that they seem like living creatures– and the figures are so numerous and the design so complex, that one might study it a week without exhausting its interest…everywhere that a niche or a perch can be found about the enormous building, from summit to base, there is a marble statue, and every statue is a study in itself…Away above, on the lofty roof, rank on rank of carved and fretted spires spring high in the air, and through their rich tracery one sees the sky beyond. …(Up on) the roof…springing from its broad marble flagstones, were the long files of spires, looking very tall close at hand, but diminishing in the distance…We could see, now, that the statue on the top of each was the size of a large man, though they all looked like dolls from the street… They say that the Cathedral of Milan is second only to St. Peter’s at Rome. I cannot understand how it can be second to anything made by human hands. ” —Mark Twain, Innocents Abroad.

All texts except pictures are extracted from Wikipedia and are enhanced by me, Text is available under the terms of the GNU Free Documentation License, (see Copyrights for details). 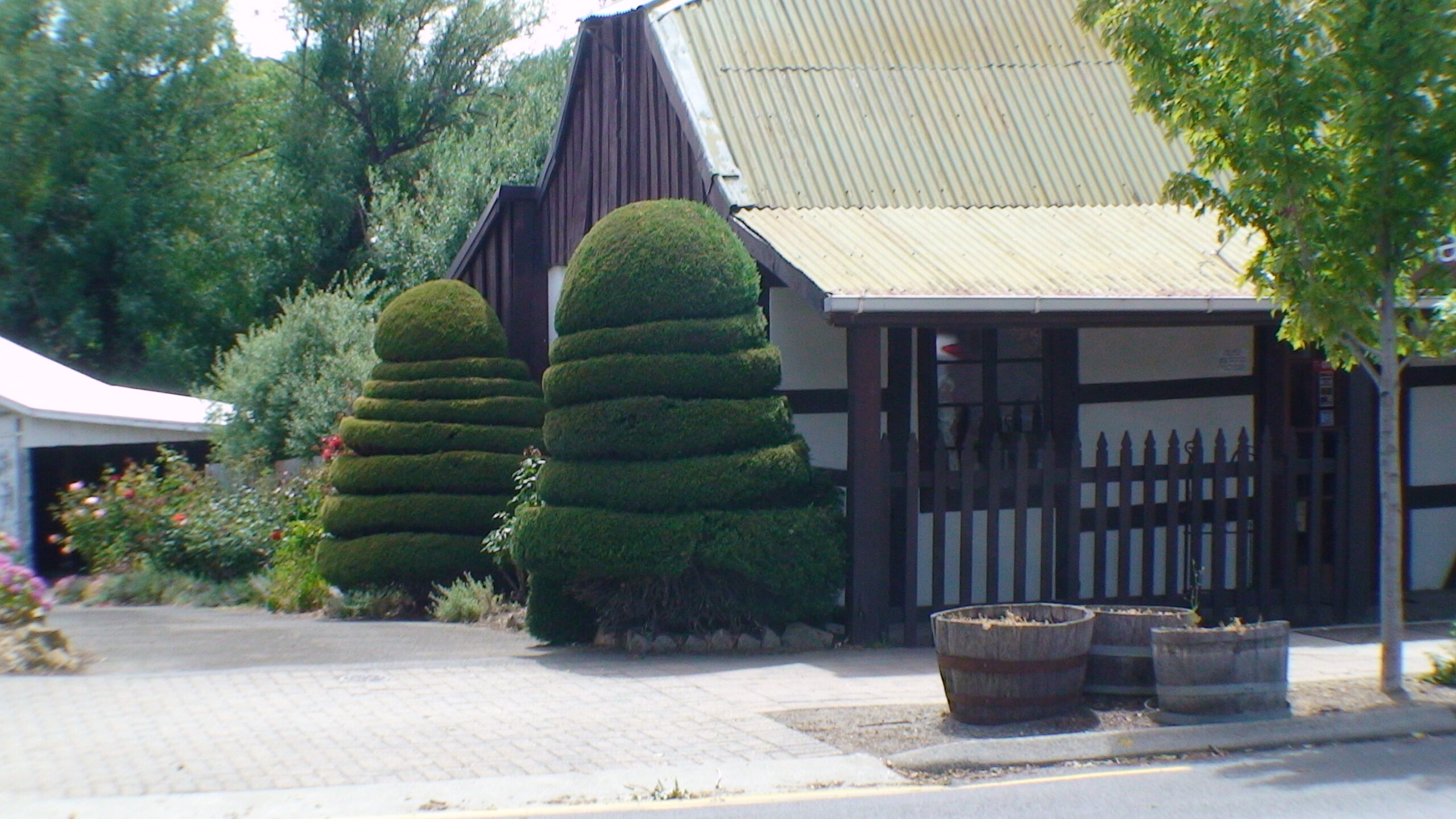 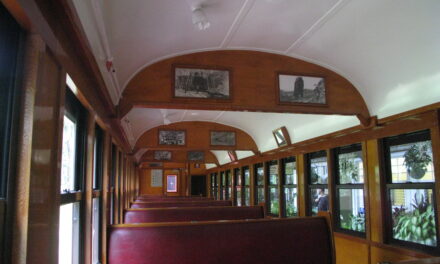 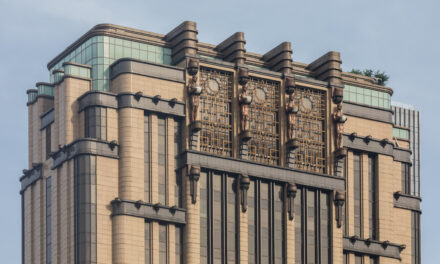